At Holy Name Catholic School, we see every child as a child of God. Our school exists to assist to pass on the gift of our Catholic faith and to assist parents in their role as the primary educators of their children. Our gracious Lord has provided the following scholarships to allow families without the financial means to receive the gift of a Catholic education. If you have any questions about the scholarships available or being able to afford a Catholic education at Holy Name please contact me @ 906-786-7550 ext. 11 or jcarlson@holynamecrusaders.com. The Lord always provides.

If you are reading this and are inspired to contribute to our scholarship program or leave a legacy in your honor. Please contact myself or our development director, Michelle Bink @ 906-786-7550 or alumni@holynamecrusaders.com at the school to learn about how you can continue to make a difference in a child’s life today and tomorrow.

Below is a list of the scholarships available and a brief description of each one.

Diocese of Marquette Scholarship – The diocese has a commitment to ensuring that families in need are able to receive a Catholic Education and has committed approximately $5,000 each year.

Gartland Scholarship – Is a private scholarship made possible by the generosity of Ken and Pat Gartland. This scholarship awards four $500.00 scholarships each year to students attending Holy Name Catholic School that are also practicing members of St. Anthony of Padua Catholic Church of Wells MI.

Leo and Elizabeth Moreau Scholarship – Is a private scholarship made possible by the generosity of Leo & Elizabeth Moreau. This scholarship awards four $500.00 scholarships each year to students attending Holy Name Catholic School that are also practicing members of St. Thomas the Apostle Parish in Escanaba, MI.

HNCS Scholarship – This endowment is the largest of the scholarships awarded from the school. This endowment awards between $70,000-$80,000 to assists families in need with their tuition depending on market value. Distributions added annually include the following: Lucille C. Artibee Charitable Trust, Louis J. Kintziger Irrevocable Trust & Walter & Lucille Maves Irrevocable Trust.

The Sackerson Foundation – This foundation was set up by the now deceased Mr. Edward Sackerson. The foundation awards $20,000 in scholarships annually to the school each year to assist families with their tuition expenses.

Spring Fling Tuition Assistance – The Spring Fling is a annual dinner and auction held each spring as a fundraiser for the school. Each year a portion of the proceeds from the Spring Fling are committed to the school’s scholarship program.

Tuition Angel Scholarship – This unique account is set up for any benefactor who wishes to donate for those times when situations arise that are beyond a family’s control. Perhaps an illness, loss of job or other unforeseen event that happens. 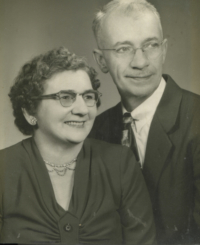 Marie Theoret, the oldest of six children of Mose and Leah Theoret, graduated from Escanaba High School in 1941. She received a Masters Degree in Education from the University of Wisconsin and taught at Pulaski High School in Milwaukee for 35 years. She served as English Department Chair at PHS for 25 years.

After her retirement, Marie relocated to Flat Rock, MI to care for her aging mother, Leah. During her nearly 30 years of retirement, she was extremely active in faith formation and evangelization at Holy Family Parish in Flat Rock. Marie served as a weekday lector, evangelization coordinator, and taught CCD. She was also a strong supporter of Holy Name School and St. Francis de Sales School where her nephew Fr. Glenn Theoret was stationed for 12 years.

Mose and Leah, Marie’s parents and Fr. Glenn’s grandparents, owned and operated a general merchandise store in the community of Flat Rock, located between Escanaba and Gladstone. Leah also taught for several years at Naden School, a one-room schoolhouse in Flat Rock. Mose and Leah were founding life-long members of Holy Family Parish in Flat Rock. Catholic faith and education were values that they held with high regard throughout their lives.

To keep the memory of her beloved parents and their strong values of Catholic education alive, Marie wished to establish a tuition assistance fund in their name to help make Catholic School education affordable for all families who want sound Catholic foundations for their children.

Catherine ‘Katie’ M. Van Donsel Annual Scholarship in Memory of Harry & Margaret Van Donsel – Katie was a lifelong resident of Gladstone, Michigan and passed away on April 6, 2020 at the age of 92, and was a member of All Saints Catholic Church in Gladstone, Michigan. Katie set up an annual scholarship for a Holy Name Catholic School student(s) to be distributed annually in memory of her parents, Harry & Margaret Van Donsel.