Documents from the early 1950s demonstrated the need for a larger Catholic high school than St. Joseph’s could provide. According to “The Door To Christian Education: Your Hand Holds The Key” fundraising portfolio, which contains the original plans and blueprints for the then-potential Catholic Central High School for the Delta County area, “…its [St. Joseph High School’s] facilities are taxed to the utmost in training even this small portion of the total number of youngsters who yearly clamor for that Catholic Education which is their rightful heritage.”

The following excerpt from “The Door To Christian Education: Your Hand Holds The Key” further confirmed the need for a larger Catholic high school:  “To serve adequately the needs of the Catholic children of high school age in this region, a central high school must be constructed to accommodate at least 600 students. The cost of such a school will be $1,100,000. This is the minimum amount which is needed. But half the battle already is won. The late Mrs. Catherine Bonifas bequeathed $600,000 for construction of such a school in Escanaba. This gesture of generosity means that the Catholic people of this area will be asked to give only half the cost of the school — which in reality is their total responsibility. Therefore, an all-out campaign to provide a minimum of $500,000 has been launched to erect a Catholic Central High School to serve the Catholic children of this area.”

The fundraising goal was met, and Holy Name Catholic Central High School first opened in Fall 1954, with an enrollment of 438 students. The Rev. O’Neil D’Amour of Wells came to Holy Name High School as superintendent and to organize the new school. Then, in 1955, the Reverend Aloysius J. Hasenberg (who was also chaplain of St. Francis Hospital at the time) was appointed administrator of Holy Name High School by the Most Reverend Thomas L. Noa, D.D., Ph.D., then-bishop of the Diocese of Marquette.

The Franciscan Sisters of Christian Charity, the School Sisters of Notre Dame, the Adrian Dominican Sisters, the Christian Brothers of the St. Louis Province, along with area priests and secular lay instructors, all taught at Holy Name High School.

A 1954 article written about Holy Name High School showed the community’s pride for the new high school. The following is an excerpt from an article entitled: St. Louis Brothers Begin Work in Escanaba, Michigan: …“Holy Name High School is a comprehensive secondary educational institution, presenting the strong academic, vocational and cultural programs so characteristic of Catholic schools. Journalism, dramatics and athletics play important roles in its activities. A very large gymnasium, one of the most capacious in the Upper Peninsula, with a seating capacity in excess of 2,100, affords splendid opportunity for a worthwhile physical education program…”

The high school served the communities of Escanaba, Gladstone, Flat Rock, Perronville, Schaffer, Bark River, Spalding, Rapid River, Garden, Fayette, Perkins and Cornell, and even more small towns as far out as Arnold (in Marquette County) over the years. The school continued to grow in enrollment as the years passed. For example, according to a Sept. 7, 1955 Daily Press news article, enrollment at HNHS was slightly over 500 in 1955. According to the article, enrollment increased in all four grades, with the largest increase in the freshman class, which had an enrollment of 153, and a sophomore class of 143 students for the 1955-56 school year.

Parochial education was widespread in the Escanaba area at the time, as Escanaba also had four parochial grade schools at the parishes of St. Anne, St. Joseph, St. Patrick, and St. Thomas. (St. Anthony of Padua Church in Wells, which was built in 1955 and dedicated in December 1955, did not have a grade school.)

The Catholic grade schools and Holy Name High School closed in 1971, largely due to the passage of Proposal C (based on the Blaine Amendment), which prohibited direct government funding of non-public/religious education. This led to the opening of Holy Name Central Grade School, with a tuition-based model. Since 1971, Holy Name Central Grade School has offered a high quality, faith-based education for students in kindergarten through eighth grade.

To reflect its commitment to Catholic education, the school changed its name to Holy Name Catholic School during the 2008-2009 school year.

Over the decades, the Holy Name Catholic School building has undergone extensive renovations, including a new roof, new lockers, new state-of-the-art science lab and technology lab, new tile flooring in the school Chapel, a complete refinishing of the gymnasium floor (including painting of new Crusader logo), and last but not least, new bathrooms, water fountains and tile. In 2018-2019, extensive renovations to the school’s multi-purpose room and teacher’s lounge were completed. The multi-purpose room now features a beautiful new cultured stone backdrop to the San Damiano Cross—donated in memory of Sophie Kleiman—that hangs on the north wall behind the altar, beautifying the room where weekly all-school Masses are celebrated. Most recently, in time for the start of the 2020 school year, renovations to the classrooms were completed, including all new custom wood cabinets, and new carpeting and furniture in the school entryway.

The school’s commitment to offering a high-quality Catholic education for area children remains strong, with Holy Name now also offering preschool. Holy Name is able to offer this education to area children thanks to the support of area families and the generosity of the four local subsidizing parishes of St. Anne, St. Joseph & St. Patrick, St. Thomas the Apostle and St. Anthony of Padua.

At a time when many of the area public schools experienced declining or stagnant enrollment, Holy Name Catholic School experienced substantial growth – from the 2008-09 school year when enrollment in preschool through eighth grade was at 258 students, to 329 students in the 2019-2020 school year—an increase of 28 percent.

The school recently added Latin to its curriculum, for students in third through sixth grade, and was expanded to include seventh and eighth grades in the 2018-19 school year. HNCS also offers students numerous extra-curricular activities, along with before and after-school care. The Catholic faith is still taught in every grade at Holy Name Catholic School, and Catholicism permeates the entire HNCS curriculum, offering students a valuable opportunity to learn about their faith.

Though the school undoubtedly faces challenges due to the current COVID-19 pandemic, Holy Name Catholic School teachers and staff remain strongly committed to offering a Classical Catholic curriculum to all of their students.

The Next Chapter: The plan to reopen Holy Name High School in Fall 2021

The success of this Classical curriculum in the elementary school has laid a strong foundation for the future of Catholic education in the Upper Peninsula, which includes a centrally-located Classical high school to serve the entire diocese.

Though the Diocese of Marquette Catholic schools are geographically remote – nestled among the forests of Michigan’s Upper Peninsula – Holy Name Catholic School Principal Joseph Carlson hopes to soon open a high school – which would be the only one in the U.P. A HNHS Committee was formed and has been working toward a goal of re-opening Holy Name High School fifty years after it closed – in Fall 2021.

Given the schools’ achievements, as well as the HNHS Committee’s research on the importance of a Catholic high school education for area children, Mr. Carlson says he has faith in the Lord to make the high school a reality.

“We trust that the Lord will provide the means to make this happen, and with the continued support and leadership of Bishop John Doerfler and our superintendent, Mark Salisbury, I am confident that the doors of Holy Name High School will reopen,” HNCS Principal Carlson said. “We still have a way to go in fundraising, but we trust that if this is the Lord’s plan, He will touch people’s hearts and help us to get there. As faithful Catholics, we ask for your prayers for this endeavor. God has shown us every step of the way thus far and we trust Him to help provide us with the financial support we need.”

For more information, or to financially support the campaign, visit http://www.NowIsTheTimeHNHS.com. To view a copy of the foundations document of the curriculum, visit www.dioceseofmarquette.org/catholicschools and click on the link at the bottom of the page.

-Researched and written by Victoria LaFave

Above is a view of the portion of more than 1,000 volunteer workers who gathered with members of the Reverend clergy and sisters on Sunday, February 22 in St. Joseph church basement in Escanaba to hear the Most. Rev. Thomas L. Noa, D.D., Bishop of Marquette inaugurate the $500,000 Catholic Central High School building fund campaign. 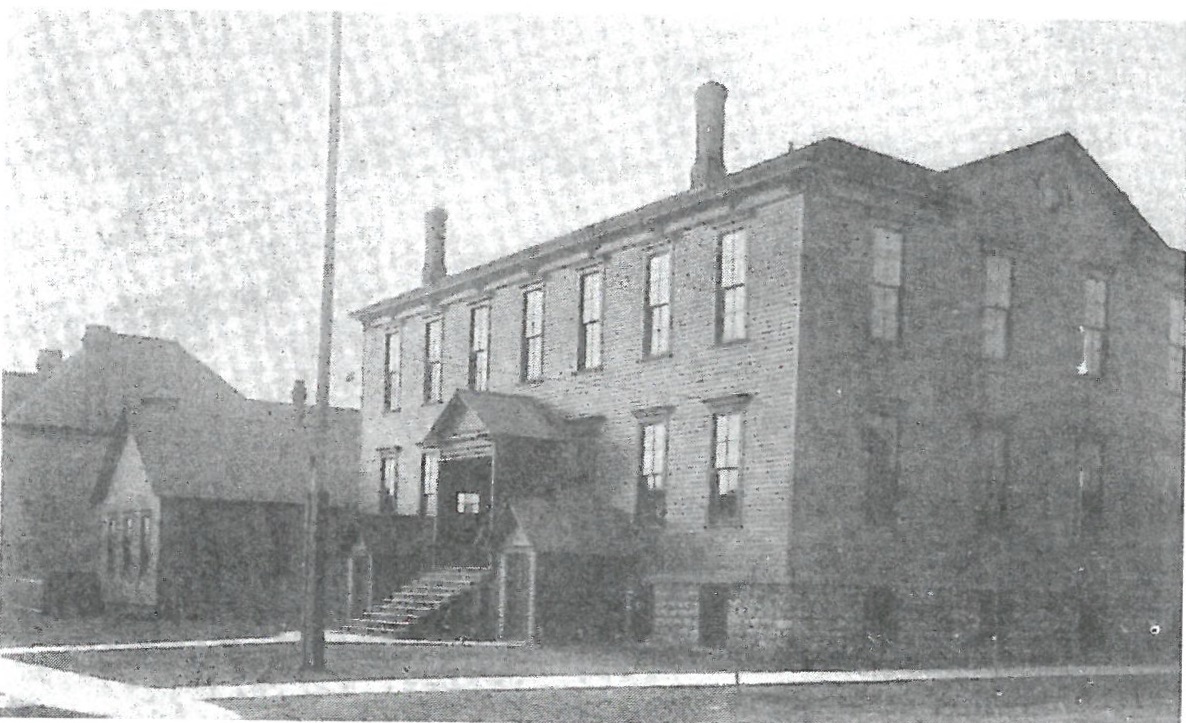 In 1884 St. Joseph Parish built St. Joseph School. This was not a large building but somehow hundreds of pupils attended this school each year. In 1891, 561 pupils were enrolled and from the beginning this school took its students through high school. As early as 1888, four years after the school began, its first high school graduated. This building lasted until 1914 when it was destroyed by fire. 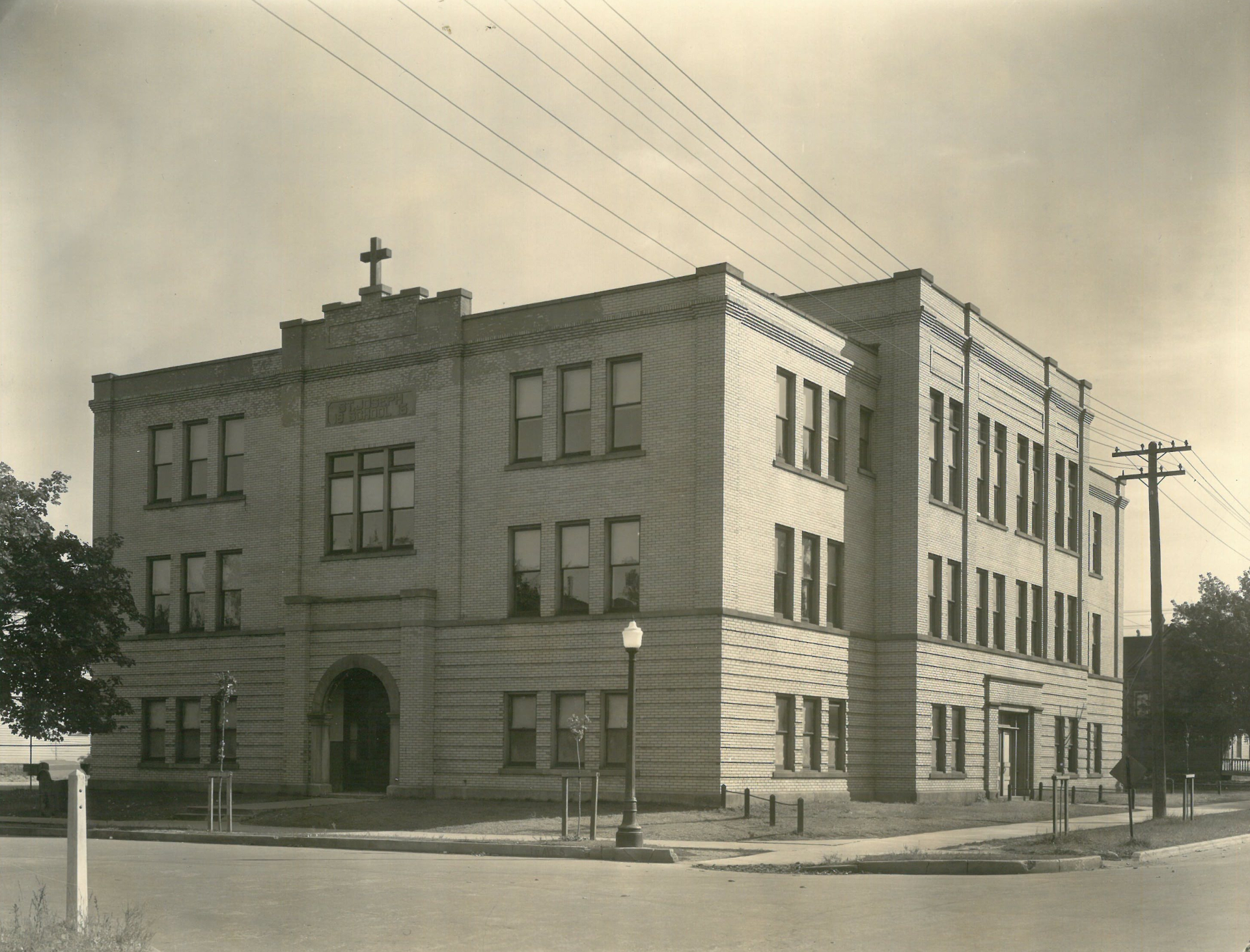 St. Joseph High School after the fire burned down the original. Date is believed to be 1915. 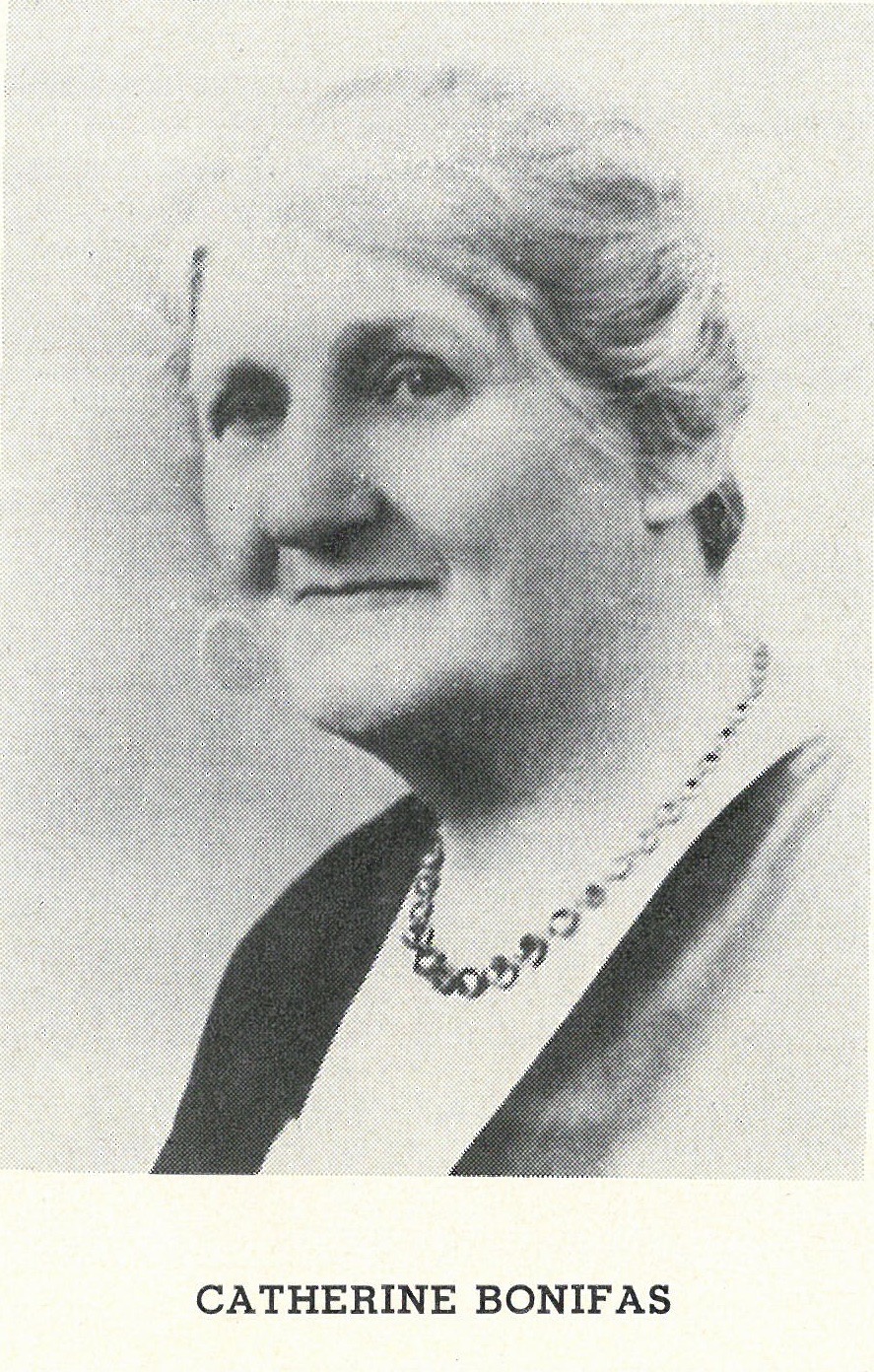 Catherine Bonifas, whose generosity provided the inspiration that made Holy Name Catholic Central High School possible. The late Mrs. Catherine Bonifas bequeathed $600,000 for the construction which today would be $5.8 million dollars. 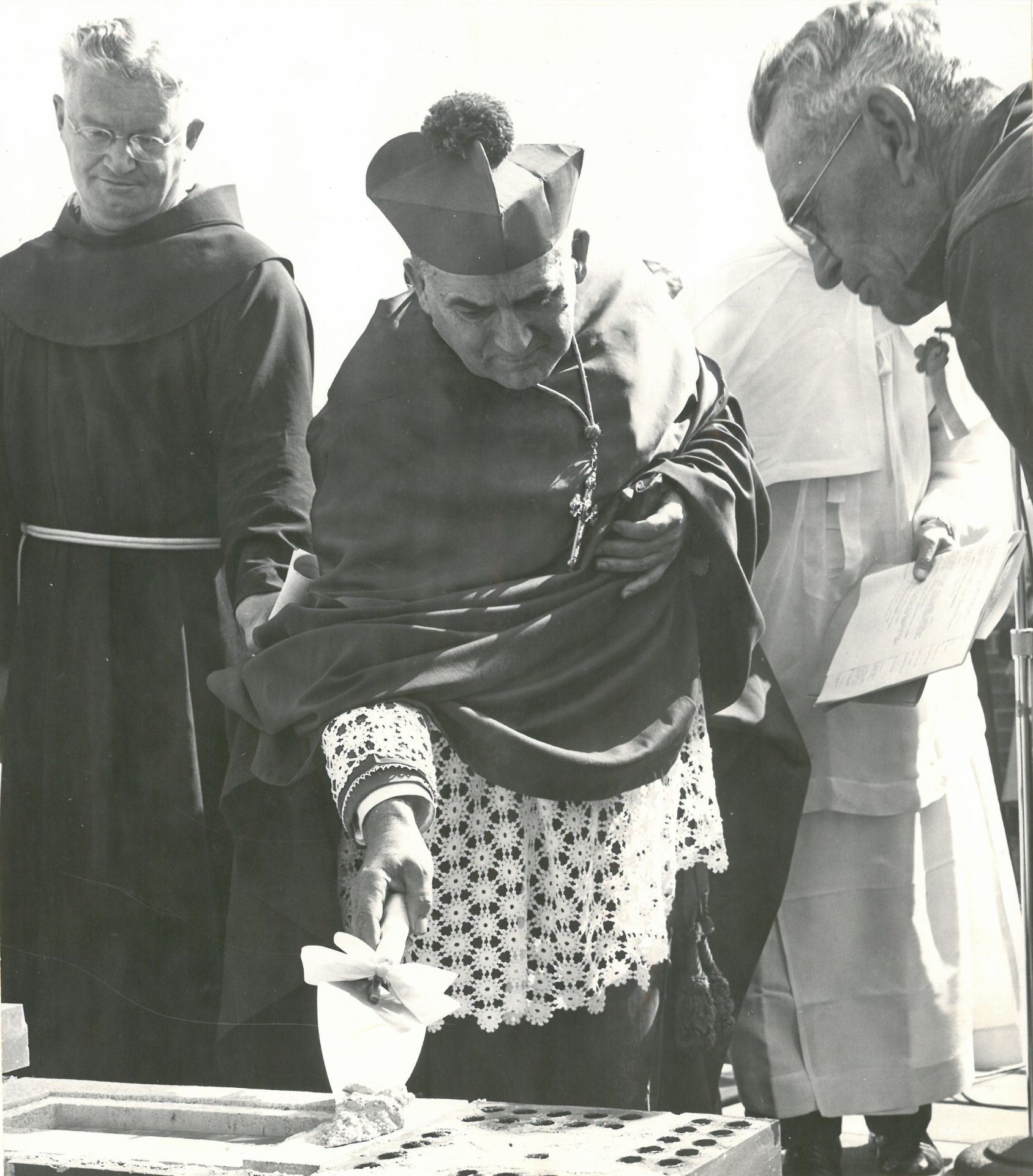 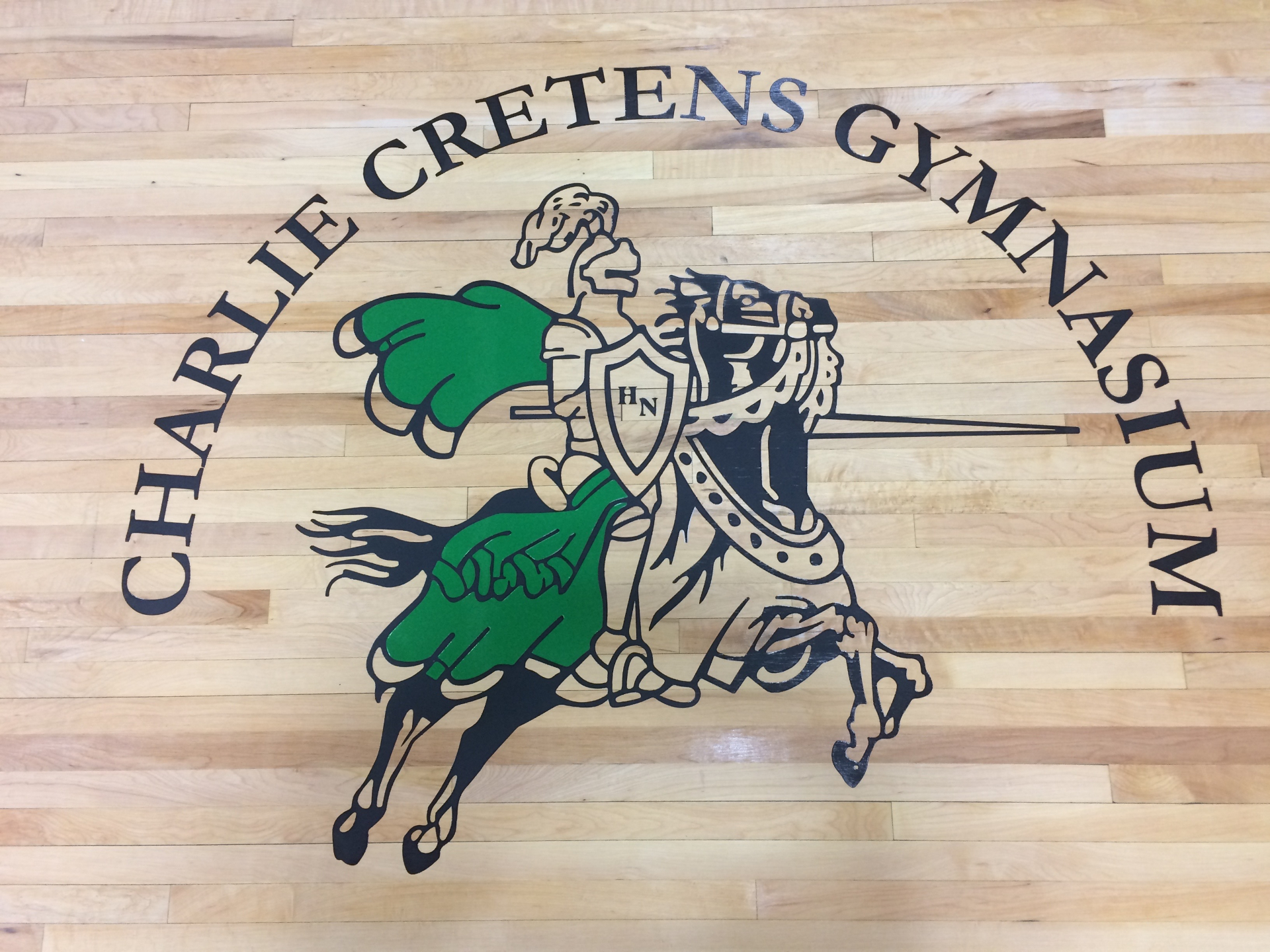